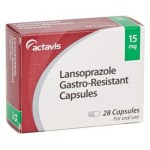 Lansoprazole is only the second drug available in the United States (the first was Omeprazole) that interferes with the so-called “proton-pump” in the mucous lining of the stomach. This is the last stage of acid production and, as a result of this effect Lansoprazole can turn off stomach acid production within 1 hour after it is taken. Lansoprazole is accepted in the United States for short-term treatment of duodenal ulcers (up to 4 weeks) and corrosive esophagitis (up to 8 weeks), a condition in which stomach contents flow backward into the esophagus (the pipe that connects the throat to the stomach), resulting in erosion of the esophagus by stomach acid. This medicine is also approved for other conditions in which stomach acid plays a key role or in which excess stomach acid is produced as a part of the condition; Zollinger-Ellison syndrome is the most common of these. Lansoprazole has not yet been accepted for treatment of stomach ulcers, although Omeprazole is widely prescribed for that purpose.

Do not take this drug if you are sensitive or allergic to it. Animal studies indicate that long-term use of this medicine can be related to an increase in stomach tumors, but it is not known if this is also a problem for humans. Lansoprazole relieves symptoms very quickly, but this may not mean that the underlying problem has been solved.

Lansoprazole should be taken before a meal, preferably breakfast. Taking it after meals seriously interferes with the absorption of Lansoprazole into the blood.

Adult: 15 to 30 mg a day. In some conditions, daily doses can go as high as 120 mg or more. Reduced dosage may be needed in people with severe liver disease.
Child: not recommended.

In one case of a 600-mg overdose, there were no adverse effects. Call your local poison center or hospital emergency room for information if you suspect a Lansoprazole overdose. If you go to an emergency room for treatment, ALWAYS bring, the medicine bottle with you.

Lansoprazole capsules should be swallowed whole. Don’t open or crush them.
If you forget to take a dose of Lansoprazole, take it as soon as you remember. If it is almost time for your next dose, skip the forgotten dose and continue with your regular schedule.

Pregnancy/Breast-feeding
There is no information about the effect of taking Lansoprazole during pregnancy. This drug should not be taken during pregnancy unless absolutely necessary.
This drug may pass into human breast milk and may affect nursing infants. Nursing mothers who must take Lansoprazole should consider bottle-feeding their babies.

Seniors
Older adults clear this drug from their bodies more slowly than younger adults. Daily doses larger than 30 mg should not be taken unless specifically necessary to control disease symptoms.