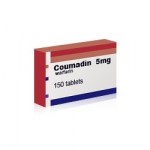 Anticoagulation (thinning of the blood) is generally a secondary way of preventing other diseases – including blood clots in the arms and legs, pulmonary embolism, heart attack, or abnormal heart rhythms – in which the formation of blood clots may cause serious problems. Anticoagulants work by suppressing the body’s normal production of various factors that are essential to the coagulation mechanism. If you are taking Warfarin, you must take it exactly as prescribed. Notify your doctor at the earliest sign of unusual bleeding or bruising, passage of blood in your urine or stool, and/or passage of black tarry stool. Anticoagulant drug interactions are extremely important (see Drug Interactions).

Warfarin can be extremely dangerous if not used properly. Periodic blood tests to monitor clotting time or the time it takes to begin the clotting process are required for proper control of Warfarin therapy.

Warfarin must be taken with care if you have any blood-clotting disease. Other conditions in which the use of Warfarin should be discussed with your doctor are threatened abortion, recent surgery, protein C deficiency (a hereditary condition), liver inflammation, kidney disease, infection, active tuberculosis, severe or prolonged dietary deficiencies, stomach ulcers, bleeding from the genital or urinary areas, moderate to severe high blood pressure, severe diabetes, vein irritation, disease of the large bowel (such as diverticulitis or ulcerative eolith), and subacute bacterial endocarditis.

People taking Warfarin must be extremely careful to avoid cuts or bruises, or other injuries that might cause internal or external bleeding.

This medicine is best taken on an empty stomach because food slows the rate at which it is absorbed into the blood.

Vitamin K counteracts Warfarin. You should avoid eating large quantities of foods rich in vitamin K, such as green leafy vegetables. Also, any change in dietary habits or alcohol intake can affect Warfarin’s action in your body.

2 to 15 (or more) mg a day; dosage is variable and must be individualized by your doctor.

The primary symptom of overdosage is bleeding. Bleeding can make itself known by appearance of blood in the urine or stool, an unusual number of black-and-blue marks, oozing of blood from minor cuts, or bleeding from the gums after brushing the teeth. If bleeding does not stop within 10 to 15 minutes, call your doctor, who may tell you to skip a dose of anticoagulant or to go to a hospital or doctor’s office where blood evaluations can be made; or your doctor may give you a prescription for vitamin K, which antagonizes the effect of Warfarin. This approach has some dangers because it can complicate subsequent anticoagulant therapy, but this is a decision that your doctor must make.

Do not change Warfarin brands without your doctor’s knowledge. Different brands of Warfarin may not be equivalent to each other and may not produce the same effect on your blood.

Do not stop taking your Warfarin unless directed to do so by your doctor. Be sure you have enough medicine when you travel or at other times when you might not have access to your regular pharmacy.
Do not stop or start any other medicine without your doctor’s and/or pharmacist’s knowledge. Avoid alcohol, Aspirin (and other salicylates), and drastic changes in your diet, since all of these can affect your response to Warfarin.

Call your doctor if you develop Unusual bleeding or bruising; red or black tarry stool; or red or dark-brown urine. Warfarin can turn your urine a red-orange color. This is different from blood in the urine (red to brownish color) and generally happens only if your urine has less acid in it than normal.

If you forget to take a dose of Warfarin, take it as soon as you remember, then go back to your regular schedule. If you don’t remember until the next day, skip the missed dose and continue with your regular schedule. Do not take a double dose. Doubling the dose may cause bleeding. Be sure to tell your doctor if you miss any doses.

Pregnancy/Breast-feeding
Warfarin should not be taken by pregnant; women. If you are taking Warfarin and become pregnant, see your doctor immediately. Warfarin passes into the fetus and cause bleeding, brain and other abnormalities, and stilbirth in 30 percent of fetuses exposed to the drug.
In some pregnant women, the benefits to be gained from taking Warfarin (or another anticoagulant) may outweigh its possible negative effects, but the drug should not be taken during the first 3 months of pregnancy. The decision to use an anticoagulant is an important one that should be made by you and your doctor together. Often, pregnant women who need anticoagulant treatment are given Heparin (which must be injected) because it does not cross into the fetal blood system.
Warfarin passes into breast milk in an inactive form. Full-term babies are not affected, but the effect on premature babies is not known. You should bottle-feed your baby until you stop taking this drug.

Seniors
Older adults may be more sensitive to the effects of Warfarin and other anticoagulant drugs. The reasons for this are not clear but may have to do with a reduced ability to clear the drug from their bodies. Seniors generally require lower doses to achieve the same results.