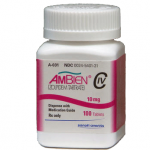 Zolpidem is a nonbenzodiazepine sleeping pill that works in the brain in much the same way as benzodiazepine sleeping pills and tranquilizers. Unlike the benzodiazepines, however, Zolpidem has little muscle-relaxing or antiseizure effect. It is meant for short-term (7 to 10 days) use and should not be taken regularly for longer than that without your doctor’s knowledge, although it has been studied for longer periods of time. Unlike the benzodiazepines, Zolpidem causes little or no hangover, nor are there any rebound effects on nights following treatment when you do not take any medication. Zolpidem has only a minimal effect on sleep stages, especially the all-important rapid eye movement (REM) sleep stage, in which many important functions are accomplished, including dreaming. Zolpidem is broken down in the liver.

Sleeping problems are often part of a physical or psychological illness. Drugs like Zolpidem may treat the symptom (Sleeplessness) but do not affect the underlying reason why you can’t sleep. They should be taken only with your doctor’s knowledge. If you still cannot sleep after 7 to 10 days of taking Zolpidem, it may mean that the basic problem is getting worse and that you should see your doctor for other treatment.

Zolpidem has little effect on memory, unlike some of the short-acting benzodiazepine sleeping pills. It has caused some amnesia (memory loss), but this happens mostly at doses larger than 10 mg a night.

Suddenly stopping Zolpidem after having taken it for some time may produce drug withdrawal symptoms (fatigue, nausea, flushing, light-headedness, crying, vomiting, stomach cramps, panic, nervousness, and general discomfort). Other more serious signs of drug withdrawal (not feeling well, sleeplessness, muscle cramps, abdominal cramps, increased sweating, tremors, and convulsions) have not been seen after sudden withdrawal from Zolpidem. People with a history of substance abuse may be more likely to develop drug dependence on Zolpidem.

Zolpidem has all the effects of other nervous-system depressants and can cause loss of coordination and concentration. It should be taken only before bedtime and never if you need to do something that requires complete concentration. There is a possibility that activities to be performed on the day following a Zolpidem dose could also be affected, especially if alcohol was taken together with Zolpidem.

People with liver disease are much more sensitive to the effects of Zolpidem and need less medicine to produce the same effect as people with normal liver function. People with severe kidney disease should be watched for any unusual drug effect, but that has not occurred so far.

Other conditions with which Zolpidem should be avoided are severe depression, severe lung disease, sleep apnea (intermittent breathing while sleeping), and drunkenness. In these conditions, the depressive effects of Zolpidem may be increased and/or could be detrimental to your overall condition.

For the most rapid and complete effect, take Zolpidem on an empty stomach, at least 2 hours after a meal.

Zolpidem can cause tiredness, drowsiness, and the inability to concentrate. Be careful if you are driving, operating machinery, or performing other activities that require concentration on the day following a Zolpidem dose.

People taking Zolpidem on a regular basis may develop drug-withdrawal reactions if the medication is stopped suddenly (see Cautions and Warnings).

If you forget a dose of Zolpidem, take it as soon as you remember. If it is almost time for your next dose, skip the forgotten one and continue with your regular schedule. Do not take a double dose.

Pregnancy/Breast-feeding
Animal studies with large doses show that Zolpidem could affect a developing fetus. Because there is no reliable information about its effect during pregnancy, it should be used only if it is clearly needed.
Small amounts of Zolpidem pass into breast milk, but its effect on a nursing infant is not known. If you must take this medicine, you should bottle-feed your baby.

Seniors
Seniors are likely to be more sensitive to the effects of Zolpidem and its side effects. Seniors should take the lowest effective dose. Report any unusual side effects to your doctor.