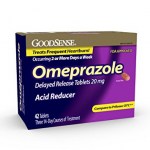 Omeprazole is officially accepted in the United States for duodenal ulcers and gastroesophageal reflux disease (GERD), a condition in which some stomach contents flow backward into the esophagus (the pipe connecting the throat and stomach). This can result in erosion of the esophagus caused by the stomach acid. Omeprazole actually stops the production of stomach acid by a method that is different from that of Cimetidine, Ranitidine, and the other H2 antagonists. It interferes with the so-called “proton-pump,” the last stage of acid production within the mucous lining of the stomach. As a result, Omeprazole can turn off stomach acid production within 1 hour after it is taken. This medicine is also approved for several other conditions in which stomach acid plays a key role or in which excess stomach acid is produced as a part of the condition. Omeprazole has not yet been officially accepted for stomach ulcers, although it is widely prescribed for that purpose.

Do not take Omeprazole if you have had an allergic reaction to it in the past.

In laboratory animal studies, Omeprazole was found to increase the numbers of some tumors. These studies have raised questions about the long-term safety of Omeprazole and the possible relationship between Omeprazole’s effects and human tumors. However, there is no current available information that shows a human-tumor risk with Omeprazole.

• Omeprazole may increase the effects of Diazepam, Phenytoin, and Warfarin by slowing the breakdown of these drugs by the fiver. It may also, interact with other drugs broken down by the liver.
• Omeprazole may interfere with the absorption from the stomach of drugs that require stomach acid as part of the process (e.g., iron, Ampicillin, and Ketoconazole).
• The use of Omeprazole with drugs that reduce the production of blood cells by the bone marrow may increase their effect.

Omeprazole should be taken immediately before a meal, preferably in the morning.

20 to 80 mg per day. Up to 120 mg per day has been used for some conditions. Antacids may be taken with Omeprazole, if needed.

There is limited experience with Omeprazole overdose, although people with Zollinger-Ellison syndrome have taken 360 mg per day without a problem. Overdose symptoms are likely to be similar to Omeprazole’s side effects. If you suspect an Omeprazole overdose, call your local poison control center or hospital emergency room for additional information.

Call your doctor if you develop unusual tiredness or weakness, sore throat, fever, sores in the mouth that don’t heal, unusual bleeding or bruising, bloody or cloudy urine, or urinary difficulties, or if side effects are unusually persistent or bothersome.

Continue taking the medication until your doctor tells you to stop, even though your symptoms may improve after 1 or 2 weeks.

If you forget to take a dose of Omeprazole, take it as soon as you remember. If it is almost time for your next dose, skip the one you forgot and continue with your regular schedule. Do not take a double dose.

Pregnancy/Breast-feeding
Animal studies with Omeprazole have shown toxic effects in developing fetuses, but no such problems have been reported in humans. However, as with most drugs, pregnant women, and those who might become pregnant, should not use Omeprazole unless its advantages clearly outweigh its possible dangers.
It is not known if Omeprazole passes into breast milk; no drug-related problems have been known to occur. Nursing mothers who use it should exercise caution and watch their babies for possible drug-related side effects.

Seniors
Seniors exhibit the same side effects seen in younger adults. However, older adults are likely to have age-related reduction in kidney and/or liver function, which could account for increased amounts of drug in the bloodstream. Report any unusual side effects to your doctor.