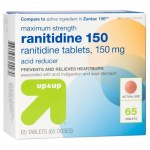 Ranitidine and other H2 antagonists work by actually turning off the system that produces stomach acid and other secretions. Ranitidine starts working within 1 hour and reaches its peak effect in 1 to 3 hours. Its effect lasts for up to 15 hours.

Ranitidine is effective in treating ulcer symptoms and preventing complications of the disease. Since all histamine H2 antagonists work in the exact same way, ulcers that do not respond to one will probably not respond to another. The only difference among the H2 antagonists is their potency. Cimetidine is the least potent, with 1000 mg roughly equal to 300 mg of Ranitidine and Nizatidine and 40 mg of Famotidine; The ulcer-healing rates of all of these drugs are roughly equivalent, as is the chance of drug side effects.

Do not take Ranitidine if you have had an allergic reaction to it or another H2 antagonist in the past. Caution must be exercised by people with kidney or liver disease who take Ranitidine because the drug is partly broken down in the liver and passes out of the body through the kidneys. Occasionally, reversible hepatitis or other liver abnormality can occur, with or without jaundice (yellowing of the skin, eyeballs, etc.). Reducing acid levels in the stomach of a person with compromised immune functions can lead to a greater chance of some intestinal worm infections.

Side effects with Ranitidine are rare.

You may take Ranitidine without regard to food or meals.

There is very little experience with Ranitidine overdose. Overdose victims may be expected to show exaggerated side-effect symptoms, but little else is known. Overdose victims must be made to vomit with Syrup of Ipecac (available at any pharmacy) to remove any remaining drug from the stomach. Call your doctor or a poison control center before doing this. If you must go to the emergency room, ALWAYS bring the medicine bottle.

It may take several days for Ranitidine to begin to relieve stomach pains. You must take this medicine exactly as directed and follow your doctor’s instructions for diet and other treatments to get the maximum benefit from it.

Call your doctor at once if any unusual side effects develop. Especially important are unusual bleeding or bruising, unusual tiredness, diarrhea, dizziness, rash, or hallucinations. Black, tarry stools or vomiting “coffee-ground”-like material may indicate that your ulcer is bleeding.

If you forget to take a dose of Ranitidine, take it as soon as you remember. If it is almost time for your next dose, skip the one you forgot and continue with your regular schedule. Do not take a double dose.

Pregnancy/Breast-feeding
Studies with laboratory animals have revealed no damage to a developing fetus. However, Ranitidine should be avoided by pregnant women and those who might become pregnant while using it. When Ranitidine use is essential, its possible benefits must be carefully weighed against its possible risks.
Large amounts of Ranitidine pass into breast milk, but no problems have been found in nursing infants. Nursing mothers must consider a possible drug effect while nursing their infants.

Seniors
Older adults respond weir to Ranitidine but may need less medication than a younger adult to achieve the desired response, because the drug is eliminated through the kidneys, and kidney function tends to decline with age. Older adults may be more susceptible to some side effects of this drug, especially confusion.