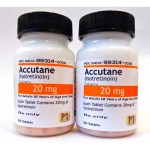 Isotretinoin was one of the first specialized products of vitamin research to be released for prescription by doctors. Researchers have long known that several vitamins, including A and D, have special properties that make them attractive treatments for specific conditions. However, the vitamins themselves are not appropriate treatments for these conditions, because of the side effects that would develop if you took the quantities needed to produce the desired effects.

It is not known exactly how Isotretinoin works in cases of severe cystic acne. It reduces the amount of sebum (the skin’s natural oily lubricant) in the skin’ shrink the skin glands that produce sebum, and inhibit the process of keratinization, in which skin cells become hardened and block the flow of sebum into the skin. Keratinization is key to the problem of severe acne because it leads to the buildup of sebum within skin follicles and causes the formation of closed comedones (whiteheads). Sebum production may be permanently reduced after Isotretinoin treatment, but no one knows why this happens.

People allergic or sensitive to vitamin A (or any vitamin A product), or to Paraben preservatives (used in Accutane), should not use Isotretinoin.

Isotretinoin has been associated with several cases of increased fluid pressure inside the head. The symptoms of this condition, known as pseudotumor cerebri, are severe headaches, nausea, vomiting, and visual disturbances.

Diabetics taking this drug may have their diabetes medicines reevaluated by their doctor. Some new cases of diabetes were found in people taking Isotretinoin, but no relationship to Isotretinoin drug therapy has been found.

Isotretinoin may cause temporary opaque spots on the cornea of your eye, causing visual disturbances. These generally go away by themselves within 2 months after the drug has been stopped.

Difficulty seeing at night can develop suddenly while taking Isotretinoin.

Several cases of severe bowel inflammation (abdominal discomfort and pain, severe diarrhea, or bleeding from the rectum) have developed in people taking Isotretinoin.

Several cases of hepatitis have been linked to Isotretinoin, and 15 percent of people who take this drug develop signs of liver inflammation.

Side-effect frequency increases with daily dose. The most severe effects occur at doses above 0.45 mg per pound of body weight per day.

Isotretinoin should be taken with food or meals. However, avoid eating liver (beef or chicken) while taking Isotretinoin, because liver contains extremely large amounts of Vitamin A. Foods with moderate amounts of vitamin A that you need not avoid, but should limit your intake of, include apricots, broccoli, cantaloupe, carrots, endive, persimmons, pumpkin, spinach, and winter squash.

0.22 to 0.9 mg per pound of body weight per day, in 2 divided doses for 15 to 20 weeks. Lower doses may be effective, but relapses are more common. Because Isotretinoin, like Vitamin A, dissolves in body fat, people weighing more than 155 pounds may Peed doses at the high end of the usual range.

If the total acne cyst count drops by 70 percent before 15 to 20 weeks, the drug may be stopped. You should stop taking this drug for 2 months after the 15- to 20-week treatment. A second course of treatment may be given if the acne does not clear up.

Isotretinoin overdose is likely to cause nausea, vomiting, lethargy, and other common drug side effects. Overdose victims must be made to vomit with Syrup of Ipecac (available at any pharmacy) to remove any remaining drug from the stomach. Call your doctor or poison control center before doing this. If you must go to a hospital emergency room, ALWAYS bring the medicine bottle with you.

Your skin may become unusually sensitive to the sun while taking this drug. Use a sunscreen and wear protective clothing until your doctor can determine if you are likely to develop this effect.

Be sure your doctor knows if you are pregnant or planning to become pregnant while taking Isotretinoin, breast-feeding, diabetic, or taking a Vitamin A supplement (as a multivitamin or Vitamin A alone), or if you or any family member has a history of high blood-triglyceride levels.

Call your doctor if you develop any severe or unusual side effects, including abdominal pain, bleeding from the rectum, severe diarrhea, headache, nausea or vomiting, any visual difficulty, severe muscle or bone and joint aches or pains, and unusual sensitivity to sunlight or to ultraviolet light.

Your acne may actually get a little worse when Isotretinoin treatment begins, but then it starts to improve. Don’t be alarmed if this happens, but your doctor should be informed.

Do not donate blood during Isotretinoin treatment (or for up to 30 days after you have stopped), because of possible risk to a developing fetus of a pregnant woman who might receive the blood.

If you forget to take a dose of Isotretinoin, take it as soon as you remember. If it is almost time for your next dose, skip the one you forgot and continue with your regular schedule. Do not take a double dose.

Pregnancy/Breast-feeding
Pregnant women and those who might become pregnant should NEVER take Isotretinoin, because it is known to cause fetal injury. This drug causes head, brain, eye, ear, and hearing abnormalities. Several cases of spontaneous abortion have been linked to Isotretinoin.
Before taking this drug, women of childbearing age or potential should take a simple urine test to confirm that they are not pregnant. Also, you must be absolutely certain that effective birth control is used starting 1 month before beginning Isotretinoin treatment and continuing 1 month after ending treatment. Accidental pregnancy during Isotretinoin therapy is considered possible grounds for a therapeutic abortion. Discuss this with your doctor immediately.
It is not known if Isotretinoin passes into breast milk. However, nursing mothers should not take Isotretinoin, because of the possibility that it will affect the nursing infant.

Seniors
Seniors may take this medication without special restriction. Follow your doctor’s directions and report any side effects at once.