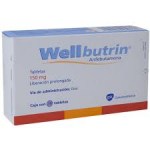 Bupropion is generally not prescribed for the treatment of severe or major depression until after other drugs have been tried, because of the higher-than-usual chance of developing seizures while taking it. Bupropion is chemically different from other antidepressants, but it is similar to Diethylpropion, an appetite suppressant.
Bupropion is not likely to work until you have taken it for 3 to 4 weeks. The drug takes about 2 weeks to clear from your system after you have stopped taking it.

People with seizure disorders, people who have had a seizure in the past, and people with eating disorders should be very careful about taking Bupropion because of the greatly increased chance of having a seizure while taking it. In doses up to 450 mg a day, about 4 of every 1000 people taking Bupropion will develop a seizure. This is about 4 times the seizure rate associated with other antidepressants. The chance of developing a seizure increases by about 10 times when the dosage is between 450 and 600 mg per day. About half of all people who developed a seizure on Bupropion had a risk factor such as a history of head injury, a previous seizure, or a nervous system tumor, or were taking another medicine associated with increase risk.

People with unstable heart disease or a recent heart attack should take this drug with caution because of possible side effects. Many people taking Bupropion experience some restlessness, agitation, anxiety, and sleeplessness, especially soon after they start taking the drug. Some even require sleeping pills to counter this effect, and others find the stimulation so severe that they have to stop taking Bupropion.

People taking Bupropion may experience hallucinations, delusions, and psychotic episodes. Dosage reduction or drug withdrawal is usually necessary to minimize these reactions. One-quarter of the people who take Bupropion lose their appetites and 5 or more pounds of body weight. Most other antidepressants cause weight gain. People who have lost weight because of their depression should be cautious about taking Bupropion.

People switching from Bupropion to a monoamine oxidase (MAO) inhibitor antidepressant, or vice versa, should allow at least 2 weeks to pass before switching. In animal studies, Bupropion has caused liver damage and tumors, but these effects have not been seen in people.

People with kidney or liver disease require less medication at the beginning of treatment. Dosage should be increased cautiously.

People with a history of drug abuse should probably be treated with a different antidepressant because they experience mild stimulation while taking Bupropion and may require a larger-than-usual dose. However, they are still susceptible to seizures at the higher doses. Severely depressed individuals are more likely to attempt suicide; therefore, they should not be given a large number of Bupropion tablets at one time.

Many other side effects have been reported with Bupropion, but their link to the drug is not well established. About 1 in 10 people who take this drug have to stop it because of intolerable side effects.

Bupropion may be taken with food if it upsets your stomach.

Overdose symptoms are likely to be exaggerated drug side effects. Most people who take a Bupropion overdose recover without a serious problem, but overdose victims may experience seizures, hallucinations, loss of consciousness, and rapid heartbeat. Death has occurred rarely in people taking massive overdoses of this drug. Overdose victims should be taken to an emergency room at once. ALWAYS bring the medicine bottle.

Do not stop taking Bupropion without your doctor’s approval. Suddenly stopping the medicine may precipitate a drug- withdrawal reaction and drug side effects.

Call your doctor if you have any of the following symptoms: agitation or excitement, restlessness, or confusion; trouble sleeping; a fast or abnormal heart rhythm; severe headache; seizure; skin rash; or fainting; or if symptoms are unusually persistent or severe.

To reduce the risk of a seizure, take this medication in 3 or 4 equal doses each day. The total daily dose should not be more than 450 mg, and single doses should not be greater than 150 mg.

Bupropion can make you tired, dizzy, or light-headed. Be careful when performing tasks requiring concentration and coordination (such as driving).

Alcohol, tranquilizers, or other nervous-system depressants will increase the depressant effects of this drug. Alcohol also increases the chance of a seizure.

Pregnancy/Breast-feeding
Pregnant women should take Bupropion only if it is absolutely necessary.
Nursing mothers who must use Bupropion should bottle-feed their babies because of the severe side effects caused by this medicine.

Seniors
No special problems have been reported in older adults. However, older adults are likely to have age-related reduction in kidney and/or liver function. This factor should be taken into account by your doctor when determining the dosage of this drug.