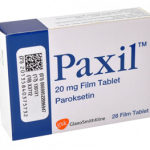 Paroxetine and the other SSRIs (Fluvoxamine, Fluoxetine, and Sertraline) are chemically unrelated to the older tricyclic and tetracyclic antidepressant medicines. They work by preventing the movement of a neurohormone, serotonin, into nerve endings. This forces the serotonin to remain in the spaces surrounding nerve ending s, where it works. Paroxetine is effective in treating common symptoms of depression. It can help improve your mood and mental alertness, increase physical activity, and improve sleep patterns. Tolerance to the effects of Paroxetine may develop over time. The drug takes between 1 and 4 weeks to start working, though you may experience some improvement in sleep patterns within 1 to 2 weeks. It stays in the body for several weeks, even after you stop taking it. This may be important when your doctor starts or stops treatment.

Unlike other SSRIs, Paroxetine does not have any weight- reducing effect.

A 2-week drug-free period should be allowed between Paroxetine and a monoamine oxidase (MAO) inhibitor antidepressant.

Paroxetine is broken down by your liver; therefore, people with severe liver disease should be cautious about taking this drug and should be treated with doses that are lower than normal.

People with reduced kidney function should take this drug with caution.

Studies in animals receiving doses 10 to 20 times the maximum human dose revealed an increase in certain liver tumors and reduced fertility. The importance of this information to humans is not known.

A small number of manic or hypomanic patients may experience ah activation of their condition while taking Paroxetine.

Paroxetine should be given with caution to patients who suffer from seizure disorders.

Paroxetine causes a reduced blood level of uric acid but has not caused kidney failure.

The possibility of suicide exists in severely depressed patients and may be present until the condition is significantly improved. Depressed patients should be allowed to carry only small quantities of Paroxetine with them to prevent overdose.

Paroxetine side effects are generally mild, often related to the size of the dose you are taking, and occur mostly during the first week you take this medicine.

In studies of Paroxetine before it was released in the United States, 15 percent of people taking it had to stop because of drug side effects. Be sure to report anything unusual to your doctor at once.

This drug can be taken without regard to food or meals.

Seniors, people with kidney or liver disease, and those taking several different medicines should remain at the lowest possible dosage for their condition.

Paroxetine can make you dizzy or drowsy. Take care when driving or doing other tasks that require alertness and concentration.

Do not drink alcoholic beverages if you are taking Paroxetine.

Be sure your doctor knows if you are pregnant, breastfeeding, or taking other prescription and nonprescription (over-the-counter) medications while taking Paroxetine. Notify your doctor of any unusual side effects.

If you forget a dose of Paroxetine, take it as soon as you remember. If it is almost time for your next dose, skip the forgotten dose and continue with your regular schedule. Do not take a double dose of Paroxetine.

Pregnancy/Breast-feeding
There are no good studies of the effect of Paroxetine on pregnant women. Do not take this drug if you are, or might become, pregnant without first seeing your doctor and reviewing the benefits of therapy against the risk of taking Paroxetine.
Paroxetine passes into breast milk in roughly the same concentration as it enters the blood. Nursing mothers should use another feeding method if they must take this medicine.

Seniors
Older adults tend to clear this drug more slowly from their bodies, but side-effect patterns are riot affected. Any person with liver or kidney disease – problems that are more common among seniors – should receive a lower dose. Be sure to report any unusual side effects to your doctor.