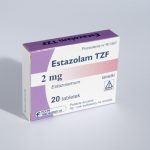 Estazolam is a member of the group of drugs known as benzodiazepines. All have some activity as either antianxiety agents, anticonvulsants, or sedatives. Benzodiazepines work by a direct effect on the brain. Benzodiazepines make it easier to go to sleep and decrease the number of times you wake up during the night.

The principal differences between these medicines lie in how long they work on your body. They all take about 2 hours to reach maximum blood level but some remain in your body longer, so they work for a longer period of time. Estazolam is considered an intermediate-acting sedative and generally remains in your body long enough to give you a good night’s sleep with minimal “hangover.” Often, sleeplessness is a reflection of another disorder that would be untreated by one of these medicines.

People with kidney or liver disease should be carefully monitored while taking Estazolam. Take the lowest possible dose to help you sleep.

Clinical depression may be increased by Estazolam, which can depress the nervous system. Intentional overdosage is more common among depressed people who take sleeping pills than those who do not.

All benzodiazepines can be abused if taken for long periods of time, and it is possible for a person taking a benzodiazepine to develop drug-withdrawal symptoms if the drug is suddenly discontinued.

• As with all benzodiazepines, the effects of Estazolam are enhanced if it is taken with an alcoholic beverage, antihistamine, tranquilizer, barbiturate, anticonvulsant medicine, antidepressant, or monoamine oxidase (MAO) inhibitor drug (most often prescribed for severe depression).
• Oral contraceptives, Cimetidine, Disulfiram, and Isoniazid may increase the effect of Estazolam by interfering with the drug’s breakdown in the liver. Probenecid also increases Estazolam’s effects.
• Cigarette smoking, Rifampin, and Theophylline may reduce the effect of Estazolam.
• Levodopa’s effectiveness may be decreased by Estazolam.
• Estazolam may increase the amount of Zidovudine, Phenytoin, or Digoxin in your bloodstream, increasing the chances of drug toxicity.
• The combination of Clozapine and benzodiazepines has led to respiratory collapse in a few people. Estazolam should be stopped at least 1 week before starting Clozapine treatment.

Estazolam may be taken with food if it upsets your stomach.

Adult (age 18 and older): 1 to 2 mg about 60 minutes before you want to go to sleep.
Senior: 0.5 to 1 mg to start. Dosage should be increased cautiously.
Child: not recommended.

The most common symptoms of overdose are confusion, sleepiness, depression, loss of muscle coordination, and slurred speech. Coma may develop if the overdose is particularly large. Overdose symptoms can develop if a single dose of only 4 times the maximum daily dose is taken. Patients who take an overdose of this drug must be made to vomit with Syrup of Ipecac (available at any pharmacy) to remove any remaining drug from the stomach. Call your doctor or a poison control center before doing this. If 30 minutes have passed since the overdose was taken or symptoms have begun to develop, the victim must be taken immediately to a hospital emergency room for treatment. ALWAYS bring the medicine bottle.

Never take more Estazolam than your doctor has prescribed.

Avoid alcoholic beverages and other nervous-system depressants while taking Estazolam.

People taking this drug must be careful when performing tasks requiring concentration and coordination because of the chance that the drug will make them tired, dizzy, or light-headed.

If you take Estazolam daily for 3 or more weeks, you may experience some withdrawal symptoms when you stop taking the drug. Talk with your doctor about the best way to discontinue the drug.

If you forget to take a dose of Estazolam and remember within about an hour of your regular time, take it as soon as you remember. If you do not remember until later, skip the forgotten dose and go back to your regular schedule. Do not take a double dose.

Pregnancy/Breast-feeding
Estazolam should absolutely not be used by pregnant women or women who, may become pregnant. Animal studies have shown that Estazolam passes easily into the fetal blood system and can affect fetal development.

Estazolam passes into breast milk and can affect a nursing infant. The drug should not be taken by nursing mothers.

Seniors
Older adults are more susceptible to the effects of Estazolam and should take the lowest possible dosage.