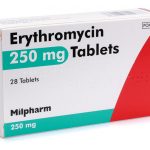 Erythromycin is a member of the group of antibiotics known as macrolides. This group of medicines, which also includes Azithromycin and Clarithromycin, are either bacteriocidal (they kill the bacteria directly) or bacteriostatic (they slow the bacteria’s growth so that the body’s natural protective mechanisms can kill them). Whether these drugs are bacteriostatic or bacteriocidal depends on the organism in question and the amount of antibiotic present in the blood or other body fluid. They are effective against all varieties of organisms, with each of the macrolide antibiotics working against a somewhat different profile of bacteria.

Erythromycin is absorbed from the gastrointestinal tract, but it is deactivated by the acid content of the stomach. Because of this, the tablet form of this drug is formulated to bypass the stomach and dissolve in the intestine.

Since the action of this antibiotic depends on its concentration within the invading bacteria, it is imperative that you follow the doctor’s directions regarding the spacing of the doses as well as the number of days you should continue taking Erythromycin. The effectiveness of this antibiotic can be severely reduced if these instructions are not followed.

Do not take Erythromycin if you are allergic to ft or to any of the macrolide antibiotics.
Erythromycin is excreted primarily through the liver. People with liver disease or damage should exercise caution and consult their doctors. Those on long-term therapy with Erythromycin are advised to have periodic blood tests.

Erythromycin is available in a variety of types and formulations. Erythromycin Estolate has occasionally produced liver difficulties, including fatigue, nausea, vomiting, abdominal cramps, and fever. If you are susceptible to stomach problems, Erythromycin may cause mild to moderate stomach upset. Discontinuing the drug will reverse this condition. If you restart Erythromycin after having experienced liver damage, it is likely that symptoms will recur within 48 hours.

Erythromycin should not be given to people with known sensitivity to this antibiotic. It may cause yellowing of the skin and eyes. If this occurs, discontinue the drug and notify your doctor immediately.

Food in the stomach will decrease the absorption rate of Erythromycin Base and Erythromycin Stearate products. They are best taken on an empty stomach or 1 hour before or 2 hours after meals, but may be taken with food if they cause stomach upset. Other forms of Erythromycin can be taken without regard to food or meals. Check with your pharmacist for specific directions.

Doses of Erythromycin Ethylsuccinate and Wyamycin are 60 percent higher due to differences in chemical composition.

Erythromycin products should be stored at room temperature, except for oral liquids and topical liquids, which should be kept in the refrigerator.

Take each dose of Erythromycin with 6 to 8 ounces of water. Call your doctor if you develop any of the following: nausea; vomiting; diarrhea; stomach cramps; severe abdominal pain; skin rash, itching or redness; dark or amber-colored urine; yellowing of the skin or eyes; or other severe or persistent side effects.

If you forget a dose of oral Erythromycin, take it as soon as you remember. If it is almost time for your next dose, space the next 2 doses over 4 to 6 hours, then go back to your regular schedule.

Remember to complete the full course of therapy prescribed by your doctor, even if you feel perfectly well after only a few days of antibiotic.

Pregnancy/Breast-feeding
Erythromycin passes into the circulation of the developing fetus. Erythromycin Estolate has caused mild liver inflammation in about 10 percent of pregnant women and should not be used if you are, or may become, pregnant. Other forms of Erythromycin have been used safely without difficulty, Erythromycin passes into breast milk. Nursing mothers who are taking the drug should watch for side effects in their nursing infants, although this happens only rarely.

Seniors
Older adults, except those with liver disease, may generally use this product without restriction.