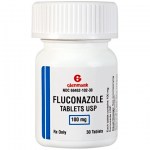 Fluconazole is an antifungal agent that is effective against a variety of fungal organisms, including Aspergillus, Cryptococcus, arid Candida. It works by inhibiting important enzyme systems in the organisms it attacks. Fluconazole’s effectiveness against Candida and Cryptococcus has made this drug an important contributor in the fight against the opportunistic fungal infections that afflict many people with AIDS.

Skin rash may be an important sign of drug toxicity, especially in people with AIDS or others with compromised immune function. Report any skin rashes, especially ones that don’t heal readily, to your doctor.

Side effects are, generally, more common among AIDS patients, but they follow the same pattern for all people taking this drug.

Fluconazole may be taken without regard to food or meals.

Symptoms of a very large Fluconazole overdose may include breathing difficulty, lethargy, excess tearing, droopy eyelids, excess salivation, loss of bladder control, convulsions, and blue discoloration of the skin under the nails. Overdose victims should be taken to a hospital emergency room for treatment. ALWAYS bring the medicine bottle.

Regular visits to your doctor are necessary to monitor your liver function and general progress.

Call your doctor if you develop reddening, loosening, blistering or peeling of the skin, darkening of the urine, yellowing of the skin or eyes, loss of appetite, or abdominal pain (especially on the right side). Other symptoms need be reported only if they are bothersome or persistent.

If you forget to take a dose of Fluconazole, take it as soon as you remember. If it is almost time for your next dose, skip the one you forgot and continue with your regular schedule. Do not take a double dose.

Pregnancy/Breast-feeding
Animal studies with Fluconazole show very specific effects on the developing fetus that have not been seen in humans. Nevertheless, pregnant women should not use Fluconazole unless the possible benefits clearly outweigh the risks.
Fluconazole passes into breast milk. Nursing mothers who must take this drug should bottle-feed their babies.

Seniors
Because seniors are more likely to have lost some kidney function, they may require a reduced dosage.