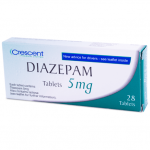 Diazepam and the other drugs named above are benzodiazepines, used as antianxiety agents, anticonvulsants, or sedatives. Some are more suited to a specific role because of differences in chemical makeup that give them greater activity in a certain area or characteristics that make them more desirable for a certain function. Often, individual drugs are limited by the applications for which their research has been sponsored. Benzodiazepines directly affect the brain. In doing so, they can relax you and make you either more tranquil or sleepier, or can slow nervous system transmissions in such a way as to act as an anticonvulsant, depending on which drug you use and your dosage. Many doctors prefer the benzodiazepines to other drugs that can be used for similar effects because they tend to be safer, have fewer side effects, and are usually as, if not more, effective.

Do not take Diazepam if you know you are sensitive or allergic to it or to another benzodiazepine drug; including Clonazepam.

Other conditions where Diazepam should be avoided are severe depression, severe lung disease, sleep apnea (intermittent breathing while sleeping), liver disease, drunkenness, and kidney disease. In all of these conditions, the depressive effects of Diazepam may be enhanced and/or could be detrimental to your overall condition.

Diazepam should not be taken by psychotic patients, because it doesn’t work for them and can cause unusual excitement, stimulation, and rage.

Diazepam is not intended for more than 3 to 4 months of continuous use. Your condition should be reassessed before continuing your medicine beyond that time.

Diazepam may be addictive, and you can experience drug- withdrawal symptoms if you suddenly stop taking it after as little as 4 to 6 weeks of treatment. Withdrawal symptoms are increased anxiety, tingling in the extremities, sensitivity to bright light or the Sun, long periods of sleep or sleeplessness, a metallic taste, flulike illness, fatigue, difficulty concentrating, restlessness, loss of appetite, nausea, irritability, headache, dizziness, sweating, muscle tension or cramps, tremors, and feeling uncomfortable. Other major symptoms are confusion, abnormal perception of movement, depersonalization, paranoid delusions, hallucinations, psychotic reactions, muscle twitching, seizures, and memory loss.

Diazepam is best taken on an empty stomach, but it may be taken with food if it upsets your stomach.

Adult: 2 to 40 mg per day. The dose must be adjusted to Individual response for maximum effect.
Senior: less of the drug is usually required to control tension and anxiety.
Child (6 months and older): 1 to 2.5 mg, 3 or 4 times per day; more may be needed to control anxiety and tension. Infant (under 6 months): do not use.

Symptoms of overdosage are confusion, sleepiness, poor coordination, lack of response to pain (such as a pin prick), loss of reflexes, shallow breathing, low blood pressure/ and coma. The victim should be taken to a hospital emergency room. ALWAYS bring the medicine bottle with you.

Diazepam can cause tiredness, drowsiness, inability to concentrate, or similar symptoms. Be careful if you are driving, operating machinery, or performing other activities that require concentration.

People taking Diazepam for more than 3 or 4 months at a time may develop drug-withdrawal reactions if the medication is stopped suddenly (see Cautions and Warnings).

If you forget a dose of Diazepam, take it as soon as you remember. If it is almost time for your next dose, skip the forgotten one and continue with your regular schedule. Do not take a double dose.

Pregnancy/Breast-feeding
Diazepam may cross info the developing fetal circulation and may cause birth defects if taken during the first 3 months of pregnancy. Avoid taking any benzodiazepine if you are or think you might be pregnant.
Diazepam may pass into breast milk. Since infants break the drug down more slowly than adults, the medicine may accumulate and have an undesirable effect on the baby. Nursing mothers who must take this drug should bottle-feed their babies.

Seniors
Older adults, especially those with liver or kidney disease, are more sensitive to the effects of Diazepam and generally require smaller doses to achieve the same effect. Follow your doctor’s directions, and report any side effects at once.