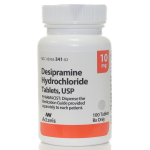 Desipramine is one of the tricyclic antidepressant drugs, which block the movement of certain stimulant chemicals in and out of nerve endings, have a sedative effect, and counteract the effects of a hormone called acetylcholine (which makes them anticholinergic drugs). They prevent the reuptake of important neurohormones (norepinephrine or serotonin) at the nerve ending. Theory says that people with depression have a chemical imbalance in their brains and that drugs such as Desipramine work to reestablish a proper balance. Although Desipramine and similar antidepressants immediately block neurohormones, it takes 2 to 4 weeks for their clinical antidepressant effect to come into play. Call your doctor if you’re not better after 6 to 8 weeks.

Tricyclic antidepressants can also elevate mood, increase physical activity and mental alertness, and improve appetite and sleep patterns in a depressed patient. They are mild sedatives and are useful in treating mild forms of depression associated with anxiety. These drugs are broken down in the liver.

Do not take Desipramine if you are allergic or sensitive to it or other tricyclic antidepressants. None of these drugs should be used if you are recovering from a heart attack.

If you have a history of epilepsy or other convulsive disorders, difficulty in urination, glaucoma, heart disease, liver disease, or hyperthyroidism, Desipramine should be taken with caution. People who are schizophrenic or paranoid may get worse if given a tricyclic antidepressant, and manic-depressive people may switch phase. This can also happen if they are changing or stopping antidepressants.

Desipramine and other antidepressants can be lethal if taken in large quantities. Severely depressed people should be allowed to keep only small numbers of pills on hand.

Desipramine is generally safer than other tricyclic antidepressants.

Take Desipramine with food if it upsets your stomach.

Adult: 75 to 300 mg per day. Your dosage must be tailored to your needs. People taking high doses of this drug should have regular heart examinations to check for side effects.
Adolescent and Senior: lower doses are recommended, usually 25 to 150 mg per day.
Child (under age 12): do not use.

This medicine can cause drowsiness, dizziness, and blurred vision. Be careful when driving or operating hazardous machinery. Avoid prolonged exposure to the sun or sun lamps.

Call your doctor at once if you develop seizures, difficult or rapid breathing, fever and sweating, blood-pressure changes, muscle stiffness, loss of bladder control, or unusual tiredness or weakness. Dry mouth may lead to an increase in dental cavities, gum bleeding and disease. People taking Desipramine should pay special attention to dental hygiene.

If you forget a dose of Desipramine, skip it and go back to your regular schedule. Do not take a double dose.

Pregnancy/Breast-feeding
Desipramine crosses into your developing baby’s circulation. Birth defects have been reported when this drug was taken during the first 3 months of pregnancy. There have been reports of newborn infants suffering from heart, breathing, and urinary problems after their mothers had taken a tricyclyc antidepressant immediately before delivery. Avoid this medication while pregnant.

Seniors
Older adults are more sensitive to the effects of this drug, especially abnormal rhythms and other heart side effects, and often require a lower dose to achieve the same effects. Follow your doctor’s directions and report any side effects at once.