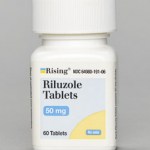 ALS is a chronic disease of the nervous system for which there has been no effective drug treatment until now. Riluzole, the first medicine ever proven to affect ALS, has a number of different actions, though nobody knows exactly how it works. The drug slows the release of glutamate, which is thought to damage important nerve centers in the brains of people with ALS, and protects other aspects of nerve function both inside and outside the nerve cell.

In studies up to 5 years done primarily with people with ALS, Riluzole improved survival during 18 months of treatment, though muscle strength and nerve function were not improved by the drug. Still, death rates at the end of the studies were the same whether people took Riluzole or not. In one study, the average survival improvement for people taking Riluzole was 60 days. Riluzole doses larger than 100 mg a day only increase the chances for drug side effects; they are not more effective.

Animals bred to mimic the nervous-system defects of ALS lived longer when given Riluzole. It also protected nerves from damage in laboratory experiments.

Women break down this drug more slowly than men and tend to have more medicine in their blood than men, but this does not affect drug dosage.

About 14 percent of people who took Riluzole in preapproval studies stopped taking it because of side effects.

Take Riluzole on an empty stomach, 1 hour before or 2 hours after meals.

There have been no reports of Riluzole overdose. Overdose victims should be taken to a hospital emergency room for treatment at once. ALWAYS bring the medicine bottle with you.

Doses higher than 50 mg twice a day do not improve your condition and may increase your chances for drug side effects.

Call your doctor at once if you become feverish or ill. This could be a sign of a very low white-blood-cell count.
Riluzole should be taken at the same time each day (morning and evening) to get maximum benefit and keep steady levels of the drug in your blood.

Riluzole can make you dizzy, tired, or faint. Don’t drive or do anything that requires intense concentration until you can judge how Riluzole affects you.

People taking this medicine should not drink to excess. Studies of Japanese natives showed they took twice as long to clear the drug from their bodies as Caucasians. It is possible that genetic factors or environmental factors such as cigarette smoking, alcohol, coffee, or diet could be responsible, but the exact reasons are not known.

Store your Riluzole tablets between 68° and 77° F and protect them from bright light.
If you forget a dose of Riluzole, take it as soon as you remember. If it is almost time for your next dose, skip the forgotten dose and continue with your regular schedule.

Pregnancy/Breast-feeding
Riluzole was toxic to pregnant lab animals at doses up to 11 times larger than the maximum human dose. There are no studies of Riluzole in pregnant women. It should be used during pregnancy only if its possible benefits outweigh its risks.
It is not known if Riluzole passes into breast milk. Nursing mothers who must take this drug should bottle-feed their babies.

Seniors
Older adults with kidney or liver disease should use Riluzole with caution.