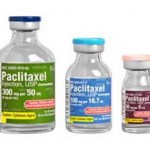 Paclitaxel is a natural substance that interferes with the process of cell division in cancerous cells. It is important to remember that this drug is recommended for use only in people who have not responded to other treatments. People who receive this drug will be premedicated with other drugs such as Diphenhydramine and Cimetidine or Ranitidine to minimize some side effects.

Studies in ovarian cancer indicated that 22 to 30 percent of women receiving the drug responded. Of a total of 92 women studied, there were 6 complete and 18 partial responses. The average survival for all people taking the drug was between 8 and 16 months. In breast cancer, studies showed response rates ranging from 26 and 30 percent to 57 percent; survival averaged almost 1 year.

This drug must be prescribed by a physician who is experienced in the use of cancer chemotherapies. Management of drug complications is possible only when adequate treatment facilities are available.
Severe drug sensitivity reactions, including breathing difficulty; low blood pressure (dizziness or fainting); swelling of the face, hands, feet, genitals, or internal organs; and generalized itching and rashes have occurred in 2 of every 100 people taking this drug. People who experience these kinds of reactions should not receive this drug again.

Bone-marrow suppression is the major toxic effect of Paclitaxel. People with low white-blood-cell counts should not receive Paclitaxel.

Fewer than 1 of every 100 people who take this drug develop severe heart problems and may require additional cardiac therapy while continuing to receive this drug.

This drug is broken down in the liver and should be used with caution in people with severe liver disease.

• When given together with Cisplatin, another antineoplastic drug, side effects were worse when Paclitaxel Was given after Cisplatin than before it.
• Ketoconazole may reduce the rate at which Paclitaxel is broken down in the body, increasing the possibility of drug side effects.

Paclitaxel can be taken without regard to food or meals.

Adult: Paclitaxel is given by intravenous injection. Dosage is individualized according to body surface area.
Child: not recommended.

There is little information on Paclitaxel overdose, but exaggerated side effects would be expected.

It is important that your care is closely supervised by your doctor while receiving this medicine.

Avoid receiving any immunizations or vaccinations while taking this drug, unless approved by your doctor.

Avoid exposure to people with a bacterial or viral infection, especially when your blood counts are likely to be low. Check with your doctor at the first sign of any cold or infection. Don’t touch the inside of your mouth or nose unless you have first washed your hands.

Call your doctor if you experience any unusual bleeding or bruising, black or tarry stools, blood in the urine or stool, or pinpoint red spots on the skin.

Be careful about dental hygiene (brushing or flossing) while on this drug because of the possibility of introducing bacteria into your system. Check with your doctor before you have any dental work done, and make sure your dentist knows you are receiving cancer chemotherapy.

Take care to avoid accidental cuts of your skin with a razor, fingernail, or other sharp objects. Avoid contact sports or other situations where bruising or injury could occur.

Pregnancy/Breast-feeding
Paclitaxel use can harm a developing fetus. Women taking this drug must be sure to use an effective contraceptive during treatment. If you are pregnant and must start taking this drug, discuss the possible hazards with your doctor.
It is not known if Paclitaxel passes into breast milk, but nursing mothers who must take this drug should bottle-feed their babies because of the possibility of toxic drug effects.

Seniors
Older adults may use this drug without special restriction.