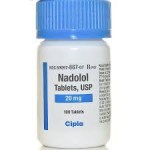 Nadolol is one of 14 beta-adrenergic-blocking drugs that interfere with the action of a specific part of the nervous system. Beta receptors are found all over the body and affect many body functions. This accounts for the usefulness of beta blockers against a wide variety of conditions. The first member of this group, Propranolol, was found to affect the entire beta-adrenergic portion of the nervous system. Newer beta blockers have been refined to affect only a portion of that system, making them more useful in the treatment of cardiovascular disorders and less useful for other purposes Other beta blockers are mild Stimulants to the heart or have other characteristics that make them more useful for a specific purpose or better for certain people.

You should be cautious about taking Nadolol if you have asthma, severe heart failure, a very slow heart rate, or heart block because the drug may aggravate these conditions.

People with angina who take Nadolol for high blood pressure should have their drug dosage reduced gradually over 1 to 2 weeks rather than suddenly discontinued to avoid possible aggravation of the angina.

Nadolol should be used with caution if you have liver or kidney disease because your ability to eliminate this drug from your body may be impaired.

Nadolol reduces the amount of blood pumped by the heart with each beat. This reduction in blood flow can aggravate or worsen the condition of people with poor circulation or circulatory disease.

If you are undergoing major surgery, your doctor may want you to stop taking Nadolol at least 2 days before surgery to permit the heart to respond more acutely to things that happen during the surgery. This is still controversial and may not hold true for all people preparing for surgery.

Side effects are usually mild, are relatively uncommon, develop early in the course of treatment, and are rarely a reason to stop taking Nadolol.

Nadolol may be taken without regard to food or meals.

40 to 240 mg per day. People with kidney damage may take their medication as infrequently as once every 60 hours.

Symptoms of overdosage are changes in heartbeat (unusually slow, unusually fast, or irregular), severe dizziness or fainting, difficulty breathing, bluish-colored fingernails or palms, and seizures. The overdose victim should be taken to a hospital emergency room where proper therapy can be given. ALWAYS bring the medicine bottle.

Nadolol is meant to be taken continuously. Do not stop taking it unless directed to do so by your doctor; abrupt withdrawal may cause chest pain, difficulty breathing, increased sweating, and unusually fast or irregular heartbeat. The dose should be lowered gradually over a period of about 2 weeks.

Call your doctor at once if any of the following symptoms develop: back or joint pains, difficulty breathing, cold hands or feet, depression, skin rash, or changes in heartbeat. Nadolol may produce an undesirable lowering of blood pressure, leading to dizziness or fainting. Call your doctor if this happens to you. Call your doctor about the following side effects only if they persist or are bothersome: anxiety, diarrhea, constipation, sexual impotence, headache, itching, nausea or vomiting, nightmares or vivid dreams, upset stomach, trouble sleeping, stuffy nose, frequent urination, unusual tiredness, or weakness.

Nadolol can cause drowsiness, dizziness, light-headedness, or blurred vision. Be careful when driving or performing complex tasks.

Pregnancy/Breast-feeding
Infants born to women who took a beta blocker weighed less at birth and had low blood pressure and reduced heart rate. Nadolol should be avoided by pregnant women and those who might become pregnant while taking it. When the drug is considered essential by your doctor, its potential benefits must be carefully weighed against its risks.
Nadolol passes into breast milk, but problems are rare. Still, nursing mothers taking this medicine should bottle-feed their babies.

Seniors
Seniors may absorb and retain more Nadolol in their bodies, thus requiring less medicine to achieve the same results. Your doctor will need to adjust your dosage to meet your needs. Seniors taking this medicine may be more likely to suffer from cold hands and feet, reduced body temperature, chest pains, general feelings of ill health, sudden breathing difficulty, increased sweating, or changes in heartbeat.