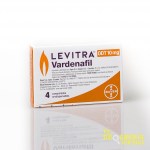 Vardenafil is commercially available in the form of film-coated tablets and orodispersible tablets (Levitra, co-marketing drug: Vivanza). It has been approved since 2003. Generics were approved in 2018.

Vardenafil is a member of the group of phosphodiesterase 5 inhibitors for the treatment of erectile dysfunction in men. It facilitates the influx of blood into the penis and allows the formation and maintenance of the erection. Vardenafil works only with sexual stimulation. The tablets are taken no more than once daily 25 to 60 minutes before sexual intercourse and independently of the meals. It should be noted that vardenafil should not be taken with certain other medicines as it may cause a dangerous drop in blood pressure. The most common possible unwanted effects include flushing, headache, dyspepsia, nausea, dizziness and a stuffy nose.

The complete precautionary measures can be found in the medicinal product information.

Slightly less, but still occurring in about one percent of cases,  is a number of other side effects that can occur when you take Levitra. The most serious of these are problems of the cardiovascular system such as palpitations or accelerated heartbeat and visual disturbances (especially color vision or redness of the eyes). If these side effects occur, consult a doctor if necessary.

As a side effect, other sensory stimuli may be disturbed, for example, by a numbness with limited touch sensitivity or interference with hearing sets. In addition, skin or mucous membrane swelling, fatigue or even insomnia, severe gastrointestinal problems, inflammatory effects, shortness of breath or increased liver enzyme levels may occur. Also, backache or muscle pain and muscle stiffness are possible. Especially with overdoses there is a risk of a permanent erection, which must be treated by a doctor.

More severe side effects that you should absolutely consult with a doctor are very rare. These include, in particular, severe visual disturbances, for example due to inflammation of the eyes or increased intraocular pressure and cardiovascular problems (myocardial infarction, cardiac arrhythmia, angina pectoris, changes in blood pressure). It can also lead to anxiety, unconsciousness and seizures. Nosebleeds and bleeding in the penis are also possible in rare cases. Last but not least, memory loss and sunlight sensitivity can also occur.

Vardenafil is mainly metabolised by CYP3A4 and to a lesser extent by CYP3A5 and CYP2C9. Appropriate drug interactions are possible. Nitrates, NO donors, amyl nitrite and antihypertensives can cause a dangerous drop in blood pressure.

Levitra works best when it is taken in a fasted state or after a meal with a low content of fat. Taken after a high-fat meal or a large quantity of alcohol, Levitra will not produce its effect to the full capacity. The same concerns the side effects of the drug, which are minimized by simultaneous intake of meals. It is recommended to consume both food and alcohol in moderation when taking Levitra tablets.

Vardenafil has vasodilating and hypotensive properties. In sexual stimulation it leads to a relaxation of the smooth muscle in the cavernous body and to an increase of the blood inflow into the penis. The effects are based on the potent inhibition of cGMP-specific phosphodiesterase type 5 (PDE5), leading to an increase in cGMP, which mediates these effects as a second messenger of nitric oxide (NO). Vardenafil has a medium half-life of 4-5 hours. It is thus in the same range as sildenafil.

According to the technical information given in the package insert, the tablets are taken no more than once daily 25 to 60 minutes before sexual intercourse and independently of the meals. However, a high-fat meal can delay the onset of action.

If you suspect that you have Levitra overdose, seek help from a healthcare provider or poison control center. The symptoms of overdose usually mimic side effects described in the respective section. To avoid Levitra overdose, never take more than one pill in the dose recommended to you by prescriber.

Vardenafil is contraindicated in the case of hypersensitivity, certain cardiovascular diseases, severe hepatic insufficiency, end stage renal disease and retinal degenerative diseases. Vardenafil must not be combined with nitrates, NO donors or amyl nitrite. Concomitant administration with strong CYP3A4 inhibitors is also not indicated. The complete precautionary measures can be found in the medicinal product information.

Levitra Use In Special Populations

In the case of pre-existing conditions and the use of certain medications, care should be taken with Levitra. Especially cardiovascular diseases are critical here. If you have recently had a heart attack or a stroke, you should not take Levitra. The combination of Levitra with certain heart medications, especially nitrate-based, is very dangerous. For example, if you are taking Alpha-Blockers for high blood pressure, you should also do without Levitra.