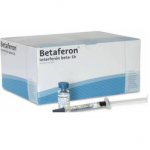 Multiple sclerosis (MS) is an inflammatory disease in which protective central-nervous-system myelin sheathes are broken down by immune system abnormalities. This leads to a gradual and progressive loss of muscle tone and function, progressive weakness, and paralysis. Exacerbations or episodes of MS in which the disease worsens develop slowly and may take weeks to months to resolve. About two thirds of MS sufferers have the relapsing-remitting form, in which stable periods are followed by periods of worsening disease. Until now, MS treatment has been aimed at controlling the symptoms of the disease. Interferon beta-1b is a biotechnological product that has been found to help reduce the number and severity of MS flare-ups in some patients. It shares antitumor, antiviral, and other actions with other interferons, but it has much more of an effect on the immune system.

This medicine, the first to be approved for any form of MS, was studied in 372 patients for 2 years before its approval by the Food and Drug Administration. Studies will continue to investigate whether Interferon beta-1b can slow or prevent the worsening of MS over time. Nobody knows how this medicine produces its effect.

The safety and benefit of this drug in chronic, progressive MS have not been proven.
Potentially severe depression and Suicidal tendencies have been experienced by patients taking Interferon beta-1b. Report any depressive feelings or tendencies to your doctor.

Half of patients who take this drug are likely to develop flu-like symptoms, including fever, chills, muscle aches, sweating, and feelings of ill health.

Interferon beta-1b can make you unusually sensitive to the sun. Wear protective clothing and use a sunscreen if you are taking this drug.

8 million units every other day by subcutaneous injection. This medicine may be self-administered at home in much the same way that Insulin injections are taken.

The effects of Interferon beta-1b overdose are unknown. Symptoms are most likely to be exaggerated side effects. Cali your doctor or poison control center for more information.

Interferon beta-1 b may be associated with severe depression. Mood swings or changes, lack of interest in daily activities, excessive sleep, and other possible signs of depression should be reported to your doctor at once.

Interferon beta-1b injections should be taken at the same time each day to establish them as part of your daily routine. If you forget to take a dose of Interferon beta-1 b, take it as soon as you remember. If it is almost time for your next dose, skip the forgotten dose and continue with your regular schedule. Do not take a double dose.

Pregnancy/Breast-feeding
The effect of this product on pregnant women and nursing mothers is not known. Exercise caution with all medicines.

Seniors
Seniors may use this medicine without special restriction.