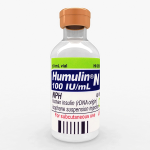 Prescribed for: Type I (Insulin-dependent) diabetes mellitus and Type II (non-Insulin-dependent) diabetes mellitus that cannot be controlled by diet. Insulin may also be used in a hospital, together with glucose injection, to treat hyperkalemia (high blood-potassium levels). It is also used for severe complications of diabetes, including ketoacidosis or diabetic coma.

Insulin is a complex hormone normally produced by the pancreas. Diabetes develops when the body does not make enough Insulin or when the Insulin does not work. At one time, most of the Insulin used as a drug was obtained from animals. Today, most of what is used is human Insulin manufactured by biosynthetic techniques. People whose diabetes is well controlled by Insulin derived from an animal source should not be automatically switched to a human Insulin product, but new diabetics are usually treated with highly purified synthetic human Insulin.

Synthetic human Insulin is identical in structure to the Insulin we make in our bodies: Insulin derived from pork is closer in chemical structure to our own Insulin than that derived from beef, and causes fewer reactions. So-called human Insulin products differ in slight, but significant, ways from animal-derived Insulin.
Human Insulin is the product of choice for (1) people allergic to other Insulin products, (2) all pregnant diabetic women, (3) people who need Insulin only for short periods (during surgery, etc.), and (4) all newly diagnosed diabetics. It causes fewer allergic reactions than the older Insulins manufactured from pork and/or beef sources. Human Insulins may also be produced by semisynthetic processes. These semisynthetic Insulins, however, start with an animal product and may contain some of the same impurities. Animal Insulin used for injection is the unmodified material derived from an animal source, usually beef or pork.

Regular Insulin starts to work quickly and lasts only 6 to 8 hours. People using only Insulin injection must take several injections per day. Pharmaceutical scientists have been able to add other chemical structures onto the Insulin molecule to extend the time over which the drug works. Prompt Insulin

Zinc Suspension (also called Semilente Insulin), like Insulin for injection, is considered rapid-acting. It starts to work in 30 to 60 minutes and lasts 12 to 16 hours.

The intermediate-acting Insulins (NPH or Isophane Insulin and Lente or Insulin Zinc Suspension) start working T to 2 1/2 hours after injection and continue to work for 24 hours. Long-acting Insulins (PZI or Protamine Zinc Insulin Suspension and Ultralente or Extended Insulin Zinc Suspension) begin working 4 to 8 hours after injection, and last for 36 hours or more. Other factors that have a definite influence on Insulin response include diet, exercise, and other drugs being used.

Insulin products derived from natural sources contain a number of normal contaminants. In the 1970s, processes were developed to remove many of these contaminants. The first process resulted in single-peak Insulin, making the action of the drug more predictable and safer. Today, all insulin sold in the United States is single-peak, and most of that is identical to natural human Insulin. The second refinement resulted in purified Insulin, which produces fewer reactions at the injection site than single-peak Insulin.

Be sure to take the exact dose of Insulin that was prescribed. Too much Insulin will excessively lower blood sugar, and too little will not control the diabetes. Do not change Insulin brands or types unless you are under direct medical supervision. Diabetics taking Insulin must follow their prescribed diet and should avoid alcoholic beverages.

Low blood sugar (see Overdosage for symptoms) can result from taking too much Insulin, doing excess physical work or exercise without eating, or not absorbing food normally because meals are postponed or skipped, or because of illness with vomiting, fever, or diarrhea. Often, you can correct the situation by eating sugar or something with sugar in it. You can also use a commercial 40 percent glucose product, but they work in the same way as plain sugar or candy. The symptoms of low blood sugar are less pronounced if you are taking human Insulin rather than an animal Insulin, but the possible consequences are just as dire.

• Your Insulin dosage may need to be raised if you are taking drugs that increase blood-sugar levels: These include corticosteroids, oral contraceptives, Dextrothyroxine, Diltiazem, Dobutamine, Epinephrine, cigarettes, thiazide-type diuretics, thyroid hormones, estrogens, Furosemide, Molindone, Phenytoin, and Ethacrynic Acid.
• Other medicines can lower blood sugar and may require a reduced insulin dosage. These medicines include alcohol, anabolic steroids, beta-blocking drugs, Clofibrate, Fenfluramine, Phenylbutazone, Sulfinpyrazone, Tetracycline, Guanethidine, monoamine oxidase (MAO) inhibitor antidepressants, and Aspirin (in large doses).
• Oral antidiabetes drugs also lower blood sugar and should be taken together with Insulin only if you are under the direct care of a doctor. Nonsteroidal anti-inflammatory drugs (NSAIDs) may also increase the blood-sugar-lowering effect of Insulin, but by a different mechanism.
• Beta-blocking drugs can mask the symptoms of low blood sugar and thus increase the risk of taking Insulin.
• Stopping smoking cigarettes, using a Nicotine patch or gum, or taking other smoking deterrents can also lower blood sugar by increasing the amount of Insulin that is absorbed after injection under the skin. Lowering of your Insulin dose may be necessary if you stop smoking.
• Insulin may affect blood-potassium levels and can affect Digitalis drugs.

Follow your doctor’s directions for diet restrictions. Diet is a key element in controlling your disease.

The dose and kind of Insulin must be individualized to your specific need. Insulin is generally injected half an hour before meals; the longer-acting forms are taken half an hour before breakfast. Since Insulin can be given only by injection, diabetics must learn to give themselves their Insulin subcutaneously (under the skin) or have a family member or friend give them injections. Hospitalized patients may receive Insulin injection directly into a vein.

One manufacturer has developed a device to aid in injecting Insulin. The device looks like a pen and is easily used. Another type of injection convenience device is the Insulin- infusion pump. The pump automatically administers a predetermined amount of regular Insulin. Consult your doctor or pharmacist for complete details on either of these devices.

If swallowed, Insulin has little or no effect, because it is not absorbed into the blood. Injecting too much Insulin will cause low blood sugar. Symptoms come suddenly and include weakness, fatigue, nervousness, confusion, headache, double vision, convulsions, dizziness, psychoses, unconsciousness, rapid shallow breathing, numbness or tingling around the mouth, hunger, nausea, loss of skin color, dry skin, and pulse changes. Overdose victims should eat chocolate, candy, or another sugar source at once to raise blood-sugar levels. Call your doctor immediately.

Use the same brand and strength of Insulin and Insulin syringes or administration devices to avoid dosage, errors. Rotate injection sites to prevent fat loss at the site.

Mix Insulins according to your doctor’s directions; don’t change the mixing method or the mixing order.

Your Insulin requirements may change if you get sick, especially if you vomit or have a fever.

If your Insulin is in suspension form, you must evenly distribute the particles throughout the liquid before taking the dose out. Do this by gently rotating the vial and turning it over several times. Do not shake the vial.
Diabetics must pay special attention to dental hygiene because of their increased chance of developing oral infections. Also, your dentist may detect other signa of advancing diabetes during an examination. Be sure your dentist knows you have diabetes.

Have your eyes checked regularly. One of the primary complications of diabetes (blood-vessel disease) may be seen by an eye doctor during a routine eye examination.

Read and follow all patient information provided with the Insulin products you are using. Monitor your blood and urine regularly for sugar and ketones, using over-the-counter testing products.

Insulin products are generally stable at room temperature for about 2 years. They must be kept away from direct sunlight and extreme temperatures. Most manufacturers, however, still recommend, that Insulin be stored in a refrigerator or a cool place whenever possible. Insulin should not be put in a freezer or exposed to very high temperatures; this can affect its stability. Partly used vials of Insulin should be thrown away after several weeks if not used. Do not use any Insulin that looks lumpy or grainy or that sticks to the bottle. Regular Insulin should be clear and colorless; do not use it if it is thick or cloudy.

Pregnancy/Breast-feeding
Insulin is the preferred method for controlling diabetes in pregnant women, though pregnancy usually complicates the process. Pregnant-diabetic women must follow their doctor’s directions for Insulin use exactly because Insulin requirements normally decrease during the first half of pregnancy and then increase to more than normal requirements during the second half. Pregnant women who must take Insulin injections should use human Insulin.
Insulin does not pass into breast milk. Breast-feeding can reduce your Insulin needs, despite the need for more calories. Your doctor should closely monitor your Insulin dosage during this period.

Seniors
Older adults may use Insulin without special restriction. Follow your doctor’s directions for medication and diet.