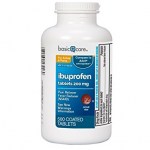 NSAIDs are drugs that relieve pain and inflammation. We do not know exactly how they work, but part of their action may be due to an ability to inhibit the body’s ability to make a hormone called prostaglandin and inhibit the action of other body chemicals, including cyclo-oxygenase, lipoxygenase, leukotrienes, lysosomal enzymes, and a host of other factors. NSAIDs are generally absorbed into the bloodstream fairly rapidly, but some work more quickly than others. NSAIDs are generally broken down in the liver and eliminated through the kidneys. Over-the-counter doses of Ibuprofen provide pain relief but are below the level at which a significant anti-inflammatory response is usually seen. Anti-inflammatory doses are in the prescription range (400 mg per dose or more) and take a week or more to develop. Pain relief should come within 30 minutes or so of taking an over-the-counter dose.

People who are allergic to Ibuprofen (or to any other NSAID) and those with a history of asthma attacks brought on by another NSAID, by Iodides, or by Aspirin should not take these medicines.

NSAIDs can cause gastrointestinal bleeding, ulcers, and perforation. This can occur at any time, with or without warning, in people who take chronic NSAID treatment. People with a history of active gastrointestinal bleeding should be cautious about taking any NSAID. Minor stomach upset, gas, or distress is common during the first few days of treatment with the NSAIDs. People who develop these symptoms and continue their NSAID treatment should be aware of the possibility of developing more serious drug toxicity.

NSAIDs can affect platelets and blood clotting at high doses and should be avoided by people with clotting problems and those taking Warfarin.

People with heart problems who use an NSAID may find that their arms and legs or feet become swollen.
People taking Ibuprofen, especially those with a collagen disease such as systemic lupus erythematosus, may experience an unusually severe drug sensitivity reaction. Report any unusual symptoms to your doctor at once.

NSAIDs can cause severe toxic effects to the kidney. Report any unusual side effects to your doctor, who may need to periodically test your kidney function.

NSAIDs can make you unusually sensitive to the effects of the sun (photosensitivity).

Severe skin reactions have occurred while taking this medication; these should be treated promptly by a physician.

• NSAIDs can increase the effects of oral anticoagulant drugs, such as Warfarin. You may take this combination, but your doctor may have to adjust your anticoagulant dose to take this effect into account.
• The blood-pressure-lowering effect of beta blockers may be reduced by NSAIDs.
• Taking an NSAID together with Cyclosporine may increase the toxic effects of each drug on the kidney.
• Ibuprofen and Indomethacin may increase Digoxin levels in the blood.
• NSAIDs may increase blood levels of Phenytoin, leading to increased Phenytoin side effects.
• Blood-Lithium levels may be increased in people taking Lithium and an NSAID.
• Methotrexate toxicity may be increased in people taking Methotrexate and an NSAID.
• NSAID blood levels may be affected by Cimetidine because of that drug’s effect on the liver.
• Probenecid may interfere with the elimination of NSAIDs from the body, increasing the chances for NSAID toxic reactions.
• Aspirin and other salicylates may decrease the amount of NSAID in your blood. These medicines should never be taken at the same time.

Take this medicine with food or a magnesium/aluminum antacid if it upsets your stomach.

People have died from NSAID overdoses. The most common signs of overdose are drowsiness, nausea, vomiting, diarrhea, abdominal pain, rapid breathing, rapid heartbeat, sweating, ringing or buzzing in the ears, confusion, disorientation, stupor, and coma. Take the victim to a hospital emergency room at once for treatment. ALWAYS bring the medicine bottle with you.

If you forget to take a dose of Ibuprofen, take it as soon as you remember. If you take several Ibuprofen doses a day and it is within 4 hours of your next regularly scheduled dose, skip the one you forgot and continue with your regular schedule. Do not take a double dose.

Pregnancy/Breast-feeding
NSAIDs may cross into the blood circulation of a developing fetus. They have not been found to cause birth defects, but animal studies have indicated a possible effect on the developing fetal heart if taken during the last half of pregnancy. Pregnant women or those who might become pregnant while taking Ibuprofen should not take it without their doctor’s approval. When the drug is considered essential by your doctor, the potential risk of taking the medicine must be carefully weighed against the benefit it might produce.

NSAIDs may pass into breast milk but have caused no problems among breast-fed infants, except for seizures in a baby whose mother was taking Indomethacin. Other NSAIDs have caused problems in animal studies. There is a possibility that a nursing mother taking an NSAID could affect her baby’s heart or cardiovascular system. If you must take Ibuprofen, use an alternative feeding method.

Seniors
Older adults, especially those with poor kidney or liver function, may be more susceptible to the side effects of the NSAIDs.