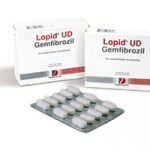 Gemfibrozil consistently reduces blood-triglyceride levels, but is usually prescribed only for people with very high blood-fat levels who have not responded to dietary changes or other therapies. Normal triglyceride levels range between 50 and 200 mg. People with very high levels (1000 to 2000 mg) are likely to have severe abdominal pains and pancreas inflammation. Gemfibrozil usually has little effect on blood-cholesterol levels, although it may reduce blood cholesterol in some people.

Gemfibrozil works by affecting the breakdown of body fats and by reducing the amount of triglyceride manufactured by the liver. It is not known if these two mechanisms are solely responsible for the drug’s effect on triglyceride levels.

Gemfibrozil should not be taken by people with severe liver or kidney disease or by those who have had allergic reactions to it in the past. Gemfibrozil users may have an increased chance of developing gallbladder disease and should realize that this drug, like other blood-fat reducers (including Clofibrate and Probucol), has not been proven to directly reduce the chance of a fatal heart attack.

Long-term studies in which male rats were given between 1 and 10 times the maximum human dose showed an increase in liver tumors (both cancerous and noncancerous). Other studies of male rats, in which 3 to 10 times the human dose was given for 10 weeks, showed that the drug reduced sperm activity, although this effect has not been reported in humans.

Estrogens can cause massive increases in triglyceride levels and may have to be discontinued in addition to Gemfibrozil treatment in some women. Other diseases such as thyroid disease and diabetes should also be considered as causes of high blood triglycerides.

People taking this drug may be more susceptible to the common cold or other viral or bacterial infections.

• Gemfibrozil increases the effects of oral anticoagulant (blood-thinning) drugs; your doctor will have to reduce your anticoagulant dosage when Gemfibrozil treatment is started.
• Taking Gemfibrozil and Lovastatin together has been associated with severe drug side effects. These effects can begin as soon as 3 weeks after you start taking the combination or may not appear for months.

Gemfibrozil is best taken on an empty stomach 30 minutes before meals, but may be taken with food if it upsets your stomach. It is important that you follow your doctor’s diet instructions.

There are no reports of Gemfibrozil overdosage, but victims might be expected to develop exaggerated side effects. Overdose victims must be made to vomit with Syrup of Ipecac (available at any pharmacy) to remove any remaining drug from the stomach. Call your doctor or poison control center before doing this. If you must go to a hospital emergency room, ALWAYS bring the medicine bottle.

Your doctor should perform periodic blood counts during the first year of Gemfibrozil treatment to check for anemia or other blood effects; Liver-function tests are also necessary. Blood-sugar levels should be checked periodically while you are taking Gemfibrozil, especially if you are diabetic or have a family history of diabetes.

Gemfibrozil may cause dizziness or blurred vision. Use caution while driving or doing anything else that requires concentration and alertness.

Call your doctor if any drug side effects become severe or intolerable, especially diarrhea, nausea, vomiting, or stomach pains or gas. These may disappear if your doctor reduces the drug dose.

If you forget to take a dose of Gemfibrozil, take it as soon as you remember. If it is almost time for your next dose, skip the one you forgot and continue with your regular schedule. Do not take a double dose.

Pregnancy/Breast-feeding
There have been no Gemfibrozil studies involving pregnant women. However, this drug should be avoided by pregnant women and by those who may become pregnant. In situations where Gemfibrozil is considered essential, its potential benefits must be carefully weighed against its risks.
Because of the tumor-stimulating effect of Gemfibrozil, nursing mothers should bottle-feed their infants while taking this drug.

Seniors
Older adults may be more likely to develop drug side effects because the drug primarily passes out of the body through the kidneys, and kidney function declines with age.