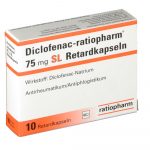 Diclofenac is one of 16 NSAIDs used for their ability to reduce pain and inflammation. Cataflam, a newer version of Diclofenac, does not contain sodium and is the preferred form for menstrual pain and cramps. Since Voltaren, the older version of Diclofenac, does contain sodium, women taking Cataflam for menstrual problems should not switch to Voltaren. NSAID eyedrops are used during eye surgery (to prevent movement of the eye muscles) and for itching and redness due to seasonal allergies. We do not know exactly how NSAIDs work, but part of their action may be due to an ability to inhibit the body’s production of a hormone called prostaglandin and to inhibit the action of other body chemicals, including cyclo-oxygenase, lipoxygenase, leukotrienes, lysosomal enzymes, and a host of other factors. NSAIDs are generally absorbed into the bloodstream fairly quickly. Pain relief generally comes within an hour after taking the first dose, but the NSAID’s anti-inflammatory effect generally takes a lot longer (several days to 2 weeks) to become apparent, and may take a month or more to reach its maximum effect. Diclofenac is broken down in the liver and eliminated through the kidneys.

People allergic to Diclofenac (or any other NSAID) and those with a history of asthma attacks brought on by another NSAID, Iodides, or Aspirin should not take Diclofenac.

Diclofenac can cause gastrointestinal (GI) bleeding, ulcers, and stomach perforation. This can occur at any time, with or without warning, in people who take chronic Diclofenac treatment. People with a history of active GI bleeding should be cautious about taking any NSAID. Minor stomach upset, distress, or gas is common during the first few days of treatment with Diclofenac. People who develop bleeding or ulcers and continue treatment should be aware of the possibility of developing more serious drug toxicity.

Diclofenac can affect platelets and blood clotting at high doses, and should be avoided by people with clotting problems and by those taking Warfarin.

People with heart problems who use Diclofenac may experience swelling in their arms, legs, or feet.

Diclofenac can cause severe toxic effects to the kidney. Report any unusual side effects to your doctor, who may need to periodically test your kidney function.

Diclofenac can make you unusually sensitive to the effects of the sun (photosensitivity).

People taking this drug on a regular basis should have their liver function checked periodically.

NSAIDs have caused severe skin reactions; if this happens to you, see your doctor immediately.
The risk of developing bleeding problems or other body-wide side effects with Diclofenac is small, because only a small amount of this drug is absorbed into the bloodstream.

Take Diclofenac with food or a magnesium/aluminum antacid if it upsets your stomach.

One drop 4 times per day beginning 24 hours after cataract surgery and continuing for 2 weeks.

Take the victim to a hospital emergency room at once. ALWAYS bring the medicine bottle.

Diclofenac can make you drowsy and/or tired: Be careful when driving or operating hazardous equipment. Do not take any nonprescription products with Acetaminophen or Aspirin while taking this drug; also, avoid alcoholic beverages.

If you are taking Cataflam for menstrual problems, be sure not to substitute Voltaren, which contains sodium.

Take each dose with a full glass of water and don’t lie down for 15 to 30 minutes after you take the medicine.

If you forget to take a dose of oral Diclofenac, take it as soon as you remember. If you take several doses a day, and it is within 4 hours of your next dose, skip the one you forgot and continue with your regular schedule. Do not take a double dose.

To self-administer the eyedrops, lie down or tilt your head backward. Hold the dropper above your eye and drop the medicine inside your lower lid while looking up. To prevent possible infection, don’t allow the dropper to touch your fingers or eyelids, or any surface. Release the lower lid and keep your eye open. Don’t blink for about 30 seconds. Press gently on the bridge of your nose at the inside corner of your eye for about a minute. This will help circulate the medicine around your eye. Wait at least 5 minutes before using any other eyedrops.

If you forget a dose of eyedrops, take it as soon as you remember. If it is almost time for your next dose, skip the one you missed and continue with your regular schedule. Do not take a double dose.

Pregnancy/Breast-feeding
NSAIDs may cross into the fetal blood circulation. They have not been found to cause birth defects, but may affect a developing fetal heart during the second half of pregnancy; animal studies indicate a possible effect. Women who are or who might become pregnant should not take Diclofenac without their doctors’ approval; pregnant women should be particularly cautious about using this drug during the last 3 months of their pregnancy. When the drug is considered essential by your doctor, its potential benefits must be carefully weighed against its risks.

NSAIDs may pass into breast milk, but have caused no problems among breast-fed infants, except for seizures in a baby whose mother was taking Indomethacin. Other NSAIDs have caused problems in animal studies. There is a possibility that a nursing mother taking Diclofenac could affect her baby’s heart or cardiovascular system. If you must take Diclofenac, bottle-feed your baby.