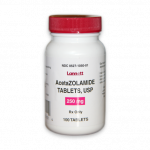 Acetazolamide inhibits an enzyme in the body called carbonic anhydrase. This effect allows the drug to be used as a weak diuretic and as part of the treatment of glaucoma by helping to reduce pressure inside the eye. The same effect on carbonic anhydrase is thought to make Acetazolamide a useful drug in treating certain epileptic seizure disorders. The exact way in which the effect is produced is not understood.

Do not take Acetazolamide if you have serious kidney, liver, or Addison’s disease. This drug should not be used by people with low blood sodium or potassium.

Side effects of short-term Acetazolamide therapy are usually minimal.

Acetazolamide may be taken with food if it causes stomach upset. Because Acetazolamide can increase potassium loss, take this drug with foods that are rich in potassium, like apricots, bananas, orange juice, or raisins.

250 mg to 1 gram per day, according to disease and patient’s condition.

Symptoms of overdosage may include drowsiness, loss of appetite, nausea, vomiting, dizziness, tingling in the hands or feet, weakness, tremors, or ringing or buzzing in the ears. Overdose victims should be made to vomit as soon as possible with Syrup of Ipecac (available at any pharmacy), and taken to a hospital emergency room for further treatment. ALWAYS bring the medicine bottle.

Acetazolamide may cause minor drowsiness and confusion, particularly during the first 2 weeks of therapy. Take care while performing tasks that require concentration, such as driving or operating appliances or machinery.

Call your doctor if you develop sore throat, fever, unusual bleeding or bruises, tingling in the hands or feet, rash, or unusual pains. These can be signs of drug side effects.
Acetazolamide can make you unusually sensitive to the sun. Avoid prolonged sun exposure and protect your eyes while taking this medicine.

If you forget a dose of Acetazolamide, take it as soon as you remember. If it is almost time for your next dose, skip the forgotten pill. Do not take a double dose.

Pregnancy/Breast-feeding
High doses of this drug may cause birth defects or interfere with your baby’s development. Check with your doctor before taking it if you are, or might be, pregnant.
Small amounts of Acetazolamide may pass into breast milk, but it has not caused problems in breast-fed infants.

Seniors
Older adults are more likely to have age-related problems that could lead to problems with Acetazolamide. Take this medication according to your doctor’s prescription.